I Can't remember the last time we worked on one of these until the last few weeks. Quite a rare beast by all accounts. 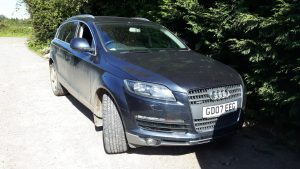 This one came to us in limp mode, and nobody could seem to get it out of limp mode! These have two particulate filters fitted, and two differential pressure sensors fitted above the gearbox. A common fault, and a bit of a pain in the rear end to get to. A quick look on live data and we discovered one of the sensors was faulty. We managed to replace one of the sensors, and reset the system using VCDS. A full regeneration later and the vehicle was running properly. The customer treated themselves to an evolution chips remap at the same time. These vehicles are fitted with a pair of ECU's, EDC16+ CP34. Both ECU's have to be recalibrated. The vehicle is now running approx. 370bhp and approx 880NM torque! The thing will pull a house down.

We can work on these ECU's through the OBD port, also BDM on the bench. We can remove the DPF functions altogether, remove the EGR system altogether, and remove any speed limiters if fitted. Not to mention a whole load of coding through VCDS at our workshop in Chard, Somerset, or at your place of work or home.

View all posts by: Stephen Dowell

The Fiesta Mk Quattro gets some love... I think u

Do we get some sort of Livery, or no? That is the

Saleen Mustang, Not many noises better than a 'bi

Apologies,. It been on socials for a few weeks. Cr

Can't be many road going ones left actually on the

How do you spend your Sundays!? Looking forward t

Another YouTube video live. I test VVT to gain tu

She's a moody little thing. To space frame the fr

Sunday evening fun. Knocking up some of the more

Go on then, how are we explaining this sort of leg

Lovely little Westfield off for its IVA soon. In

Always great to get some feedback, especially from